HotHouse Theatre, La Trobe University and the Write Around the Murray festival are thrilled to announce the shortlist for SOLO Monologue competition.

More than 200 entries – the highest number received so far for the competition – came from all states and territories in Australia, South Africa, the UK and the US.

Judges said the monologues covered a range of subjects from serious to humourous.

Shortlisted entrants receive dramaturgical advice from award-winning playwright, Mary Rachel Brown. Between now and the performance of the monologues on Thursday 8 September, shortlisted writers can rewrite or fine tune their entries.

The competition carries a $500 prize for the winner of each of the three categories – unpublished/unperformed monologues; published/performed and monologues written by high school students. 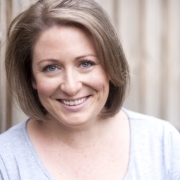 ‘HotHouse Theatre has such a wonderful reputation and I am so honoured to be joining the team in the role. HotHouse is adept at supporting new writers and theatre productions, and I too wish to nurture the young talents and minds of tomorrow’s leaders both within the arts and beyond,’ she said.

Felicity’s background is both in performance and as an educator. She first studied Music Theatre at Arts Academy Ballarat, then a Diploma of Secondary teaching at Melbourne University.

‘After this I continued my acting training at East 15 acting School in the UK. Upon graduating I joined the Whitehorse Theatre Company where I performed in three English speaking plays on tour in Germany for one year. Upon my return to Melbourne I  performed in cabaret, opera and appeared in Offspring, House Husbands and a number of television commercials.

‘Over the past eight years I have been working at Haileybury in Brighton where I taught drama to students aged prep to Year 11 and directed them in many varied school productions,’ she said.

Felicity said this term the class will be using a range of stimulus to explore the world around them, all the while learning more about each other and how empathy is essential for any great actor.

‘My passion is drama, and especially working with young people in the drama classroom. I enjoy the challenge of harnessing the many varied and creative ideas that they produce, and using them to create fun learning and develop their creative skills in a dynamic and focussed atmosphere.

‘I find young people’s energy and enthusiasm to be contagious, and this fuels an entire class and creates exciting possibilities to explore and create.

Felicity said she gets so much from the drama teaching process too.

HotHouse Drama School classes for Term 3 begin next week. There is an Early Bird offer of $20 off term fees until Friday 15 July. 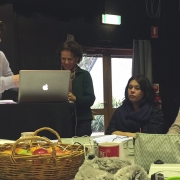 Innovative theatre maker, Roslyn Oades returned to HotHouse this week to continue her work with this year’s Studio Ensemble on the next stage of the creative development of At The Hip.

The play uses Roslyn’s headphone-verbatim and audio cued performance technique, and while challenging, ensemble members say they are enjoying working in this new way.

‘It’s not so much sounding spontaneous with the lines, but really listening for the tone of what is being said, rather than the words,’ says Matt Davidson.

Rather than reciting memorised lines, the actors wear headphones and speak along to a sequence of carefully edited audio interviews word-for-word. By confining the actors to the discipline of accompanying a recording with absolute precision (including every inflection, cough, stumble, breath and overlap), a curious, hyper-real performance style is established. (Ros Oades website.)

Ensemble members have taken on a reporter/actor role, conducting interviews with key figures and others in the region on the theme of ‘big dreams’ for the twin cities of Albury and Wodonga that are joined ‘at the hip’.

Roslyn says the group is making good progress with this next stage.

HotHouse Artistic Director and Director of At The Hip, Lyn Wallis, said most of the group had little or no experience in interview techniques before they embarked on the project.

ABC Goulburn Murray Chief of Staff and Presenter, Gaye Pattison trained the group in interviewing, and cast members and HotHouse staff assisted with the logging of interviews.  The audio script is being developed from these, and will

will continue to evolve over the next six weeks.

Lyn says HotHouse is very excited to be working with Roslyn on the project.

Roslyn also created I’m Your Man that played at the Butter Factory Theatre in 2013. Using the headphone-verbatim technique, the actors channelled the words of real-life boxing legends, transporting the audience into the boxer’s world of sweaty gyms and back-stage dressing rooms.

At the Hip opens on Tuesday 3 November for a three-week season.

Read more about Roslyn and her innovative technique.