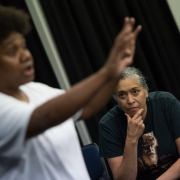 Rachael Maza is the director of My Urrwai by Ghenoa Gela, and Artistic Director of ILBIJERRI Theatre in Melbourne. She shares some broader perspectives on the priority of First Nations’ story telling.

Rachael, you are a highly regarded and award winning director. What is the priority of First Nations story telling at this time?

(Nearly choked on that first sentence!!) Self-determination: True creative and cultural authority over our stories and how they get told. We are still in a time where the paternalistic all-well-intended “you need my help” attitude still prevails with no intention of handing over the power.  We are seeing an extraordinary body of First Nations work coming out that is bold in its realisation both content and form, even unpredictable.  The work that is coming out is unapologetic, brave and full of passion and urgency.  The priority for our First Nations story-tellers themselves is to trust your voice and ‘go for it!’ Our job as a sector is to support them in a culturally safe way, and get out of the way!

This is Ghenoa’s personal story. As a Director, what are the bits of story you chose to include and why?

It was very much a collaborative process.  In the development Ghenoa told many anecdotes from her life, and soon the wall was full of story cards. The challenge was how to crystallise it down. The other collaborator critical to this selection process was Kate Champion, who worked very much from a instinctual process of linking and countering stories like beads on a necklace. One of the stories that stood out to me as a key to getting to the heart of this story was when she talked about how her anger as a young woman manifested itself almost as an alter ego, and we talked about the rage that lies just below the surface in all First Nations people, in fact just under the surface on which we all walk. This land has seen much blood shed, there has been no justice, there’s been no grieving, no healing… only pent up rage.  This became the climax of her play in the scene called RAGE in which the sky cloth pulses blood red and Ghenoa embodied pure rage.

You also have Torres Strait ancestry – there are cultural differences between Aboriginal and Torres Strait Islander peoples. What ways does this open cultural conversation between First Nations communities?

We premiered at Belvoir in Sydney Festival 2018, upstairs was My Name is Jimi.  I recall at the time  commenting on the significance of the programming: “This must be the first time Belvoir has ever programmed 2 Torres Strait Islander shows at the same time – A-Torres-Strait-Out!!, But then I thought – its actually the first time they’ve programmed 1 Torres Strait Islander show!”

What these shows did is make visible the Torres Strait Islander cultures as distinct and strong.  It was very clear that people had no idea who they actually were.

Ghenoa is a Young One, emerging in artistic leadership. What is the invitation you pose to young artists exploring their cultural identity?

Catapulting is the word I would use when describing Ghenoa’s trajectory.  She is truly a unique and exceptional talent, as anyone who has seen her perform would have noted.  I can’t say I’ve worked with anyone like her. The thing is – its who she is as a person – not just as an artist.  She in life is extraordinary, her conviction, her instinct, her strong spirit, her politics, her humour, her rage, but most importantly her cultural respect and humility – she’s the real deal alright.

If I was to give advice to other young fella’s coming up, from what I have learnt working with Ghenoa is to let yourself be your full confident self, but don’t ever forget your place in the bigger network of family, community and land – if you can find the balance between these 2 seemingly opposing forces you will find your voice.

My Urrwai plays from 29 August at the Hume Bank Butter Factory Theatre for three performances only.

It’s suitable for audiences aged 12 and above.

There are only a small number of tickets left.  Bookings can be made here 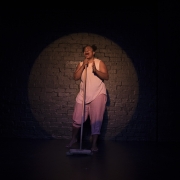 Whilst jetting about the countryside with her extensive tour for My Urrwai, Ghenoa Gela shares a little bit about the show in anticipation for the HotHouse Theatre season.

Ghenoa, What’s it like coming back to communities you’ve visited but this time with your own story? Ghenoa visited Albury-Wodonga last year with Shakespeare.

Pretty exciting! I like showing my versatility not only as a performer but as a blak artist navigating the climate of the arts industry in this country. It also shows the unapologetic visibility of the need for more blak bodies on these stages and in these spaces.

What initially brought you to performance and art making?

It was by chance. I mean I’ve been surrounded by it my whole life! My mum is a visual artist, my dad an artefact maker and between them they dance and sing amongst other things. My first real public performance that I can physically remember was when I was 5 years old doing traditional Torres Strait Islander dancing with my parents and my brothers! We would travel around QLD for NAIDOC week sharing our culture in schools! Through storytelling and dance. I never however, thought I could make a career out of it. I wanted to be the next Cathy Freeman! Haha.. I was really into sport when I was growing up as well – so that’s why it was by chance. Because I never thought about it in this way. Sharing culture is just what I’ve grown up with.

What do you experience ‘in process’ when creating new work?

What I personally experience is NEW EXPERIENCES – all the time! I learn more about myself and that’s actually something I really like! Sometimes it can be really confronting, but I have a bunch of AMAZING mentors to help me navigate my processes. So I know I’m always in a safe place and/or in safe hands.

My Urrwai holds many of your stories. Why this journey now?

Why not? The need to hear more blak stories will ALWAYS be IMPORTANT! Especially in this country. I’m just finding my own space to tell mine. And the conversations that have been I’ve sparked along the way by people who have seen my show, proves the NEED for more – because people now WANT MORE.

Rockhampton was a totally sold out show, how was it bringing your very personal story back to your home town. Is it quite a different experience to bring it back?

It. Was. Amazing. About 3/4 of the audience were friends and family! So their support was proper solid! Also, since my parents can’t really travel that much anymore, taking my show back home to perform was really the best gift I could have given them and for me to equally receive. My big brother has only seen me perform once before in my career, so having him there – no words will ever describe the immense feeling of love and happiness. The Rocky Show was proper special and I’m thankful for all the support from my family, friends and the Rocky mob and Darumbal Community.

My Urrwai plays from 29 August at the Hume Bank Butter Factory Theatre for three performances only.

It’s suitable for audiences aged 12 and above.

There are only a small number of tickets left.  Bookings can be made here