Archive for category: The Dapto Chaser 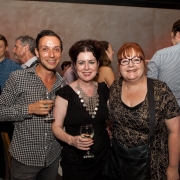 HotHouse Theatre Artistic Director, Lyn Wallis perfectly summed up the experience of watching The Dapto Chaser after its opening night.

“A great play, astute direction and awesome actors equals: a magic night in the theatre. Please join me in thanking the Dapto Chaser team for conjuring a mesmerising, arrow-to-the-heart performance at the Butter Factory Theatre tonight. And it’s the first night, of the first show, of my first season, so it feels extra special to me!”

Lyn’s enthusiasm was echoed by many audience members.

David Thurley shared his thoughts on Facebook: “Brilliant performance last night. The best play I have been to for some time. The characters were all so real, the plot is magnificent and it is so funny yet so sad as this family of battlers dream of getting the big one. Congratulations to everyone.”

And from Bobby Whybrow, Black Border Theatre Coordinator: “What a ripper! Such a great honest story which had me in fits of laughter and a couple of tears too!”

Lyn spoke about the importance of The Dapto Chaser being an independent production, by Apocalypse Theatre Company and toured by Critical Stages. All of us would like to thank Seaboard, Broughton & Walford Foundation & Griffin Theatre Company for their support of the original Sydney production, and thanked the HotHouse team – dedicated staff, teaching artists and technical team.

Mary is the recipient of The 2006 Griffin Award, 2007 Max Afford Award and The 2008 Rodney Seaborn Award and the 2016 Lyscraties Prize. Her play, Last Letters is currently on at The Australian War Memorial. Other works include The Dapto Chaser – Merrigong Theatre Company, Inside Out –Christine Dunstan Productions, Die Fledermaus (Adaption) – Sydney Conservatorium Of Music, National Security And the Art Of Taxidermy – The Glynn Nicholas Group and B Sharp, All My Sleep And Waking – TRS, Elbow Theatre; Clown Empire/Red Nose Rising Jigsaw Theatre Co. Mary ‘s TV credits include writing for The Elegant Gentleman’s Guide to Knife Fighting – ABC and Home and Away – Channel 7. Mary’s work has been given showcased readings by The National Playwriting Festival (Australia), hotINK Festival (New York), The English Speaking Theatre (Berlin)  and The Ensemble Theatre (Sydney).  Mary is a proud member of the Australian Writers’ Guild and a supporter of WITS (Women in Theatre and Screen).

Glynn Nicholas began his performing career in 1977 as a street performer in Munich so achtung. He’s performed on stage, been on telly and he also directs and produces new Australian shows which sometimes tour overseas. In 2016 following rehearsals for The Dapto Chaser he goes straight into rehearsals to direct a new musical called Song Contest –  an homage to Eurovision. Then the German production of Certified Male in Berlin. Glynn is a founding member and former Chairman of BighART a National award-winning arts company working to re-engage marginalised communities and individuals through arts-based projects. In 2011 he was awarded an Order of Australia for his services to the community as the Founder of the Society for the Prevention of Kyle Sandilands.

Toby K is an award winning light, interaction and video artist. Toby is a regular artist for Sydney Opera House’s Creative Play program and in January 2016 developed  The Unbroken Line – a 7.5m wide ‘bodyscreen’ which reacts to hands, arms and whole bodies without touch. Independently he has created Beatdice, featured at Vivid Light 2015. Beatdice is a tactile artwork allowing people to create a unique collaborative music and light sculpture. In live performance he recently designed video and lighting for I Might Blow Up Someday by queer performance trio Hissy Fit and designed video and lighting for The River Eats which toured to South Korea in October 2015. He also recently lit the national and international tours of Incredible Book Eating Boy for CDP. He won best independent lighting design for Sport For Joves 2014 production of Alls Well That Ends Well. In 2015 he begun a long term project called Orbital Illumination which aims to put mirrors in space to reflect unused sunlight down to Earth. www.orbitalillumination.com  and www.tobyk.com.au

Daryl is a composer, keyboard musician, vocal coach and musical director. He has composed music for productions at Belvoir, Ensemble, Griffin, Merrigong, Studio, ATYP, Karnak and Siren Theatre Companies, the television documentary series Heat In The Kitchen, the award winning short film Embrace, a 10 minute tango-opera An/nA and an operatic adaptation of the children’s picture book Fox that toured throughout Australia. He won first prize in the 2012 Federation Bells Composing Competition. As musical director his credits include many cabaret performances and musicals – notably the work of Stephen Sondheim for the Lyric Theatre Company and cabaret performers Mitchell Butel and the Strange Bedfellows. Daryl has been pianist for the Oz Opera Schools Company productions of The Magic Flute, The Barber Of Seville, and Cinderella touring NSW Primary Schools.  He played piano for the STC production The Women Of Troy directed by Barrie Kosky, and performs with jazz/soul singer Ali Hughes as Ali and the Thieves and they performed in The Royal Seed in the Sydney Opera House Babies Prom series and then created Leonard Cohen Koans, an exploration of Leonard Cohen’s song, poetry and prose which they took to the New York Fringe Festival and the 2014 Leonard Cohen Event held in Dublin. He premiered The Aurobindo Project, a song cycle of settings of the spiritual poetry of Sri Aurobindo in July 2015. He is currently working on Landscape With Monsters (Circa/Merrigong), Mr Stink (CDP), The Peasant Prince (Monkey Baa) and Replay (Griffin).

Angharad graduated with Distinction from the University of Wollongong after completing a Bachelor of Creative Arts (Performance). In 2012, Angharad completed a stage management secondment with the Sydney Theatre Company on Face to Face. As Assistant Stage Manager her credits include Snugglepot & Cuddlepie (CDP Theatre Producers), Hamlet and Hedda Gabler (Belvoir) as well as the original Merrigong Theatre Company production of The Dapto Chaser in 2011. She is delighted to be returning as Stage Manager for the latest tour. Her other stage management credits include Lucy Black, The Political Hearts of Children (subtlenuance), Savage in Limbo (Workhorse Theatre Company), Opera at the Forum (Pacific Opera), Rust and Bone, Fireface, Music, Minus One Sister (Stories Like These), Dirty Blonde (Garnet Productions), A Butcher of Distinction (we do not unhappen), The Lightbox (Fat Boy Dancing), Gaybies, Deathtrap, The Pride (Darlinghurst Theatre Company), RENT (Highway Run Productions), Songs For The Fallen (Critical Stages) and A Feat Incomplete at the Old 505 Theatre.

Noel is a NIDA graduate and a proud Equity member since 1979. He has worked extensively in theatre, film, television and radio. Theatre includes plays with The Sydney Theatre Company, The Queensland Theatre Company, Griffin, Apocalypse, Marian Street, Q and Railway Street Theatre Companies, The Ensemble Theatre, The State Theatre Co. of S.A., Merrigong Theatre Company and others as well as national and international tours. Multiple television and film appearances include Rake, Janet King, The Bet, Out Of The Blue (BBC), Home and Away, All Saints, Farscape and numerous others. Noel has also recorded scores of Talking Books both commercially and for Vision Australia and has been short listed for several Talking Book Awards. He won the prestigious TDK/National Library Talking Book Award for his narration of Charles Frazier’s Cold Mountain. Other notable recordings include The Hobbit, the unabridged and complete The Lord of the Rings and The Fortunes of Richard Mahoney trilogy. Noel is also a writer and dramaturg. Plays produced include The Secret House, Half Safe, Photographs, Across The Water, On The Public Record and Never A Moment’s Peace. He was dramaturg for Don Reid’s hugely popular Codgers, which has enjoyed two successful national tours.

Theatre credits include Of Mice and Men (Sport for Jove), Ruben Guthrie (La Boite), Away (STC), Thrall and Bondi Dreaming (Rock Surfers), Anything Goes (Canberra Theatre) and Men Love and the Monkey Boy (Shaman Productions). Others include The Tempest, Twelfth Night, The Merchant of Venice, King Lear, The Merry Wives of Windsor, Gary’s House, Blue Eyes and Heels, Noir, Bouncers, The Glory of Living, Fool for Love, Two Way Mirror, Look Back in Anger and many others. Television: Lennie Macpherson in both Underbelly 2 & 3, The Gods of Wheat Street, Tricky Business, Rake, Rescue Special, Ops, Crownies, The Cut, Blue Murder, The Alice, McLeod’s Daughters, All Saints, Scorched, White Collar Blue, Young Lions, Water Rats, Heartbreak High, Home & Away, Cody, Headstart, Do or Die and Backburner. Feature Films Candy, Dirty Deeds, Kangaroo Jack and The View from Greenhaven. John is also a playwright and his play Pikers has been produced at The Stables and Downstairs Belvoir theatre. His short plays Big Dougie Draws Stumps, Jesus of Marrickville and Slapping Leonard Cohen have also been successfully produced in Sydney.

Theatre Companies in Sydney including STC, Griffin and Ensemble Theatre – as well as many television appearances including the recent ABC series My Place and as a presenter on Playschool. He has worked consistently in the voice-over industry voicing many commercials as well as characters for many animation series including the lead roles in Skippy, I Got A Rocket and Gasp, which was selected for the Annecy International Animation Festival. He started as a writer on The Doug Mulray radio show and has written for many other comedy and reality programs since then, including Cliptomaniacs for TV1 and In Melbourne Tonight. In 2012 he wrote and performed The Spearcarrier, a one man show at the Ensemble Theatre. He has written and directed several short films which have screened at Flickerfest, St Kilda Film Festival, Tropfest, BOFA, Adelaide Film Festival and LA Shorts Festival.

Richard is a familiar face on both stage and screen. He has most recently performed at The Ensemble with Absent Friends. Since graduating from NIDA in 1994 Richard’s notched up a significant number of Shakespearean roles, from the ghostly Banquo in Macbeth (Bell Shakespeare) to the fool Feste in Twelfth Night (Belvoir). Richard’s also appeared in The Ianus (Bell Shakespeare), Rock n Roll (MTC), The Tempest, Love for Love (STC), The Underpants, The Small Poppies (The Ensemble). On the small screen he’s been busy with roles in House of Hancock, Wonderland 1 and 2; Power Games: The Packer-Murdoch War, Caroltta, Home and Away and Rake. His film work includes Blood Pulls a Gun and Matrix 2. 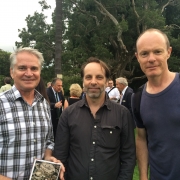