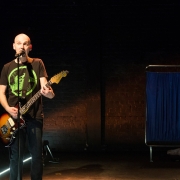 Unfortunately next week’s season of The Orchid and The Crow has had to be postponed due to a family emergency. Our thoughts are with the creative team during this difficult time.

All ticket holders have been sent an email regarding the situation, and our team will be contacting everyone over the phone to work through your options.

We are working closely with the producer to confirm new dates for the season later in the year. We apologise for any inconvenience this may cause and ask for your patience as we work through the list of patrons to contact.

We thank our wonderful HotHouse patrons old and new for their understanding.

We will still be supporting Sunshine Week  and the new Albury Wodonga Regional Cancer Centre by taking donations at our other September events – SOLO Monologue Performances – 7.30pm, Thursday 8 September; Galah Bar #4 – 6.30pm Friday 23 September and at the Gateway Village Open Day on Saturday, 24 September from 9am – 12 noon.

In 2004 Daniel found out he had stage-four testicular cancer and went searching for God. Any God. Enter Lance Armstrong, seven-times winner of the Tour de France and legendary cancer survivor.

Reflecting on Daniel’s real life experiences The Orchid and the Crow is a solo performance: part story-telling, part cabaret, part theatre, featuring original songs from the award-winning writers of Die Roten Punkte. Segueing between rock, pop, and contemporary opera, Daniel effortlessly draws the audience into the inspiring tale of his almost-death experience.

Daniel Tobias is a hugely talented and respected performer and actor, most noted in Australia for creating the ever child-like Otto in the highly successful and critically acclaimed Die Roten Punkte. Since 2006, Clare Bartholomew and Daniel, a Salvador Dinosaur have produced four award-winning Die Rotem Punkte live shows, with corresponding albums, that have toured to the USA, UK, New Zealn, Ireland, Belgium, Hungary, Poland, Canada and Germany.

The show was created and performed by Daniel Tobias; directed by Christian Leavesley; dramaturgy by Casey Bennetto; script consultant David Quirk; songs by Daniel Tobias and Clare Bartholomew with John Thorn, Casey Bennetto and Jherek Bischoff. It was developed with the assistance of the Australia Council for the Arts, Creative Victoria and the Besen Family Foundation.

See what else is on during Sunshine Week