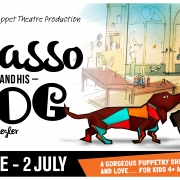 The gorgeous puppetry play Picasso and His Dog will have its world premiere tomorrow night, 29 June at The Butter Factory Theatre, Wodonga. Featuring live art-making on stage, puppetry and magic realism, the show has been developed over a number of years bringing together the creative efforts of Lemony S Puppet Theatre – Sarah Kriegler and Jacob Williams and a host of award winners in the fields of acting, set design and lighting design. You’ll find their bios below, but first writer/director, Sarah Kriegler, has paid special tribute to the production’s dramaturg, Margaret Cameron  who was a Melbourne based performance artist, director and writer with experience in a wide variety of performance contexts, both nationally and internationally.

Her artistic path was affirmed through a vital network of contemporary artists. As resident director at Chamber Made Opera Melbourne (2010-12) she co-created The Minotaur Trilogy, Melbourne Festival 2012 with artistic director and composer David Young, with whom she had a ten-year creative association. Numerous projects include A Quarreling Pair based on Jane Bowles’ puppet play, with sellout seasons for the Melbourne International Arts Festival and the Malthouse Theatre, 2004/2005/2006 and a subsequent International premiere at LaMama New York, 2009 and Festival dei Mondi, Teatro Patologica, Rome 2010, and Care Instructions a poetic reverie written by Cynthia Troup created and premiered in 2008 with subsequent performance at Transit Festival Denmark 2009. She engaged in enduring collaborations with influential US choreographer Deborah Hay (USA), and with Australian new media artist Hellen Sky in The Light Room, Melbourne Museum, Melbourne International Arts Festival (2002) and The Darker Edge of Night (2008), Arts House, Melbourne, My Darling Patricia at Performance Space and Arts House in 2009. She participated as dramaturg on many projects.

Margaret’s solo practice had enduring history. Her first work Things Calypso wanted to Say! (1987), premiered at La Mama Melbourne and continued in performance for over ten years. Her groundbreaking work Knowledge and Melancholy was first performed at La Mama in 1998 and has been produced by Performing Lines, Magdalena Australia, Magdalena USA, Rhode Island, The Articulate Practitioner, Wales, Malthouse Theatre and it is still in repertoire. This was followed by Bang! A critical fiction (2001) at La Mama and Beckett Theatre, The Mind’s a Marvelous Thing, La Mama Theatre (2002) and the proscenium Malthouse Theatre (2005), PICA (2008) and subsequently performed in Wales (2005), Denmark, Rhode Island USA and in Spanish in Piezas Connectadas Festival, Barcelona (2007).

Margaret received the prestigious Australia Council for the Arts Theatre Fellowship in 2004, was shortlisted for The Kit Denton Fellowship for Writers of Excellence in 2007 and The Louis Esson Prize for Drama for Knowledge and Melancholy, Victorian Premiers Literary Awards 1998. She received a Green Room Award for Best Ensemble 2001, Playbox Theatre and for Knowledge and Melancholy in 1999. She was recipient of The Ewa Czajor Memorial Award for Female Directors in 1998, The Gloria Payten and Gloria Dawn Travelling Fellowship in 1997, and the Ross E Trust Script Development Award 2013.

On Monday 20 October 2014, Margaret Cameron died at her home on the Bellarine Peninsula, aged 59. She was a great artist and a dear collaborator and friend and we miss her terribly.

Ben is thrilled to continue his longstanding association with Lemony S Puppet Theatre. A NIDA graduate, Ben has performed for many independent production companies as well as MTC, Bell Shakespeare Company and Radio National. Ben has always been interested in new Australian stories, creating four solo shows and performing in world premieres including Nick Enright’s St James Infirmary Blues in 1990, Jane Bodie’s Four Play in 2000, The UFO Show by Uncle Semolina (and Friends) in 2005, and The Life and Deaths of Don Koyote (The Old Van) and Hannie Rayson’s The Glass Soldier (MTC) in 2007.  In 2011 Ben won a Green Room Award (Best Male Performance in Independent Theatre 2011) for his performance as Alfie in Angus Cerini’s Save For Crying at La Mama. For the last three years he has been collaborating with world-renowned Quebecois director Robert Lepage as an actor/author in Playing Cards 2: Hearts.

Sarah is an award winning director, puppeteer, writer, and co director of Lemony S Puppet Theatre.  She trained at the VCA School of Drama (Animateuring), and Teatro San Martin Puppet School, B.A. Argentina. With Lemony S, she has created and directed many works including the award winning Foxy’s House of Horror, The Lichtenstein Nursing Home Massacre and The Rise and Fall of the Scarlet St Theatre which premiered at the Arts Centre Melbourne in September 2013.  Lemony S’ critically acclaimed work Apples and Ladders toured nationally and internationally, receiving rave reviews and a Green Room nomination. She has performed and created works with many other companies including Chamber Made Opera, Polyglot, Terrapin, Aphids, Arena, The Malthouse Theatre, Jump Lead and The Flying Fruit Fly Circus. Her television credits include Horace and Tina, Downtown Farscape and Squeak and Boo as well as the feature film Where the Wild Things Are. She is currently an Artistic Associate at Chamber Made Opera where she has just finished directing Captives of the City, commissioned by Arts Centre Melbourne. Captives of the City played to a sell-out crowd and received two Green Room Awards.  During 2014, she was a part of the MTC Women’s Director’s program and is a current member of the Contemporary and Experimental Green Room Awards Panel.  Her awards include a Churchill Fellowship, Rotary Young Achievers Award, Gasworks Award (Melbourne Fringe Festival), Best Performance for Children (Helpmann Award with the Flying Fruit Flies), Best Children’s Performance (Melbourne Fringe Festival with Alexandra Sangster and La Mama), MTV ‘Best Film Clip’ Music Award, Green Room Award (Best Puppetry) Green Room (Best Design and Realisation)

Tamara Rewse has worked as a director, designer, deviser, maker, singer and performer in puppet and visual theatre since 1997, touring internationally and nationally. Her work includes: Human Layer, (2005 Melbourne Fringe Festival Most Visionary Award), the award winning Men of Steel (Voted 2007 Top 7 shows for Children-Time Out UK and 2006 Melb Comedy Festival Directors Award), COOP for Black Hole Theatre, Mr Freezy for Arena Theatre Company, and Polyglot Theatre’s City of Riddles, Tangled Web and We Built This City; Skite Vikingr’s Tamagotchi Tam and Morbid Porn which won the 2008 Short and Sweet Full Tilt Development Award and runner-up for Best Female Performer. Tamara spent three years periodically working in puppet theatres in Europe and in early 2009 undertook a residency at GlogauAIR in Berlin developing a new work called Tuckerbag exhibited at the Kunstraum Bethanian. Her skills include making props and puppets for film, television and theatre.  Her film and television credits include: The Chronicles of Narnia – Voyage of the Dawn Treader (2009), Mad Max 4 (2010), Eye of the Storm (2010) and Elephant Princess (2009). Her work in theatre making puppets and props include: Windmill Theatre’s GRUG (2010, Winner Best Show IPAY 2011), Escape from Peligro Island (2011) School Dance (2012) and Pinocchio (2012), Polyglot Theatre’s City of Riddles and various prop and set making for Arena Theatre Company.

Recent works include Hotel Obscura for Triage and FOLA, Give Me Your Love for Ridiculusmus, The Blood! Death!! Show! with JOF and the kids of City of Yarra, In A Deep Dark Forest with The Inhabitors, Fly By Night for Arts Centre Melbourne, Great Forest Walk for Knox Festival, Evelyn Krape’s More Female Parts Arts Centre Melbourne,  16 Girls a performance art project with the St Martin’s teen ensemble for Castlemaine Festival, Boats and Separation Street two new participatory performance works for Polyglot Theatre and Museum of Imagined Touch and The Carers Project both with Jodee Mundy Collaborations.

Past collaboration with Lemony S include the Green Room award-winning Captives of the City in partnership with Chamber Made Opera. A senior Creative Manager with the Creature Technology for six years Rainbow contributed to the design and realisation of the international touring productions Walking With Dinosaurs- The Live Experience, How To Train Your Dragon – The Arena Spectacular and the design and pre-production phase of King Kong- Live on Stage. Rainbow is a graduate of the VCA – Theatre Production.

Ben TD is a musician and sound artist working in film, theatre, movement, and installation works. His introduction to composition and sound design was with Scottish theatre company, Frozen Charlotte’s production, Paperbelle, which was nominated for an Edinburgh Fringe Total Theatre Award, was a three year running, sold out, ‘Pick of the Fringe’ and continues to tour internationally. Having returned to Melbourne, he is excited to reconnect with the Australian arts community. He is also the singer and primary songwriter for the band Open Swimmer who’s acclaimed debut album, Canyon, was released in 2015.

Yvette is a graduate of the Bachelor of Production, majoring in Design at VCA. Some of her more recent credits include: designer for Sex and Death by Samara Hersch for the Festival of Live Art (FOLA) 2016 at Arts House. Art direction for The Inauguaral Annual Dance Affair (Reservoir) by True North Arts and Darebin Arts. Set and costume designer for The Theory of Everything by Thomas Quirk for Theatre Republic at Brisbane Festival 2015; set and costume designer for Kindness by Bridget Mackey, co-directed by Alice Darling and Kate Shearman; co-designer for Virgins and Cowboys, by Morgan Rose Aldrich and directed by Dave Sleswick (Motherboard Productions) – both presented as part Flight Festival at Theatreworks 2015; set and costume designer for Reasons to Stay Inside by Katy Warner, directed by Prue Clark for Melbourne Fringe Festival 2015; site design for Dance Massive at Artshouse 2015; designer and co-host of  The Everyday Imaginarium created by Tristan Meecham (All The Queens Men) for Going Nowhere Festival at Arts House and design associate to Jonathon Oxlade for Gameshow by Aphids and Tristan Meecham for FOLA 2014.

Jacob has been a puppeteer and puppetry director for more than 15 years. He is a multi award winning performer as well as director, puppet maker and a graduate of The VCA, School of Drama. Jacob began his career in Tasmania with Terrapin Puppet Theatre and has since gone on to perform and collaborate with some of Australia’s leading theatre companies. He most recently performed in Arena Theatre’s critically acclaimed new work Marlin at which premiered at MTC. During 2013-2104, he was head puppeteer on King Kong-Live on Stage for Global Creatures for which he won both a Helpmann and Green Room award. This performing relationship with Global began during 2006 when he starred as ‘T-Rex’ in Global Creatures international success Walking with Dinosaurs-The Arena Spectacular.  During 2006, he was also assistant puppetry director on the Melbourne Commonwealth Games Opening Ceremony. Jacob is the co-artistic director of Lemony S Puppet Theatre whose work has toured nationally and internationally. For Lemony S Puppet Theatre, he was recently commissioned by Arts Centre Melbourne to create the new children’s work The Rise and Fall of the Scarlet St Theatre. During February 2015, with Lemony S, Jacob collaborated with Chamber Made Opera in the creation of the new operatic work Captives of the City. 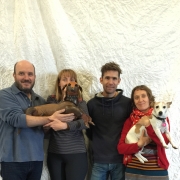 The true story of Picasso and the sausage dog Lump that arrived at the artist’s villa one fine spring morning during 1957 has inspired the gorgeous new puppetry show, Picasso and His Dog. The show will have its world premiere at HotHouse Theatre on 29 June and run until 2 July with a schedule of performances to suit families.

In the lead up to the show we’ll be celebrating all things dogs, art and love at QEII Square in Albury from 10am to noon with the Picasso and His Dog parade this Saturday, 4 June. Bring along your sausage dog, or other any other breed to take part in the categories Best Dressed – most artistic, Longest Sausage Dog and Best Tricks and you should wear your best beret and stripey shirt! We’ll have some giveaways so come along.

HotHouse Artistic Director, Lyn Wallis meets Sarah Kriegler, the writer and director of Picasso and His Dog. They talk about what kids will like about the show, Sarah’s real pooch ‘Clancy the Wonderdog’, and the pyjamas they will wear at ‘Picasso’s Pyjama Night’ on Friday 1 July.