Visceral, fierce, and uplifting,  a young man yearns for connection.

Due to restrictions of gatherings as implemented by the government in response to COVID-19, HotHouse Theatre is unable to present the Lamb by Jane Bodie on the original dates planned for September 2020.

If you have tickets to this performance, please get in touch with us to discuss your options by telephone (02) 60217433 or by email [email protected] Further information regarding our 2020 season can be found here.

“So now you have the sounds, the visuals, the feeling…this feeling in the stomach, because you know everything is about to go away.”

David can’t get enough, of anything. Alcohol, drugs, women, gambling – whatever it takes to escape the bark of the black dog.  Consumed by an overwhelming feeling of never belonging anywhere, David’s life becomes a chaotic struggle as he battles compounding mental health issues.

Breaking the Castle unlocks a sometimes jobbing actor’s descent into the hell of dependence. Days and nights are lived through a thick haze of drugs and alcohol and this bender could be his last, but he doesn’t care – there are worse things than death. Devoured by the back streets of the city David is thrown an unlikely lifeline. Finding himself in the mountains of South-East Asia he is offered a chance at redemption – but he will need to confront his inner demons, traumas and secrets long buried in his psyche.

Visceral, fierce, and uplifting Breaking the Castle brings a gripping performance from creator Peter Cook as a man yearning for connection. Directed by Caroline Stacey with The Street’s award-winning creative team this exquisitely rendered heartbreaking story opens the line between the seen, the unseen and the importance of belonging.

Written and performed by
Peter Cook 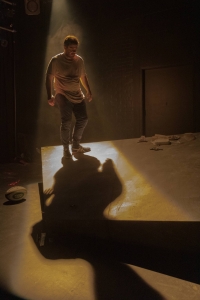 “Peter Cook’s play about addiction and recovery, ‘Breaking the Castle’, succeeds because of the quality of the writing, the extraordinary performance of Peter Cook himself and the strong production by the director, Caroline Stacey”  – Canberra Critics Circle

“Nevertheless, there is also something powerful about the decision to make Dave such a broadly relatable character. His experience is not depicted as being so unique that it could have only happened to him; rather, his is the tale of just another person trying to make a place for themselves in this world. It humanises those who are often ignored and encourages a philosophy of compassion – a laudable achievement for any creative work” – New Territory

“Breaking the Castle is not only an impressive first play from Peter Cook – in providing a compelling insight into several scourges which inflict contemporary society – it never flags during its entire 90 minute duration. It also provides a compelling showcase of Cook’s not inconsiderable acting skills, and for both these reasons, deserves your attention” – artsreview.com.au